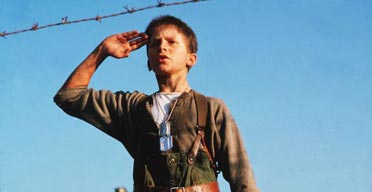 I was asked to contribute to Craig Koban’s blog as part of a series of “fondest film memories” posts.

Here is my contribution:

As long as I can recall, I’ve had a fondness for the movies. Being transported to another time and place while sitting back in a comfy chair and being entertained, enlightened or inspired.

One of my earliest filmgoing memories is seeing THE EMPIRE STRIKES BACK. It was magical to me, as a young kid, escaping into this space opera on the big screen. It felt real. As real as anything I’d experienced. And as I looked on with pure wonder and imagination in my eyes, I don’t think I could’ve understood how deep and indelible a mark it was making on my creative impulses.

I remember seeing E.T. THE EXTRA-TERRESTRIAL with my parents in the theater and crying uncontrollably at the end. So much so that my folks had to take me for a walk afterwards in the park, so that they could calm me down.

I remember hiding under the seats during a screening of THE WIZARD OF OZ because the flying monkeys were so terrifying to me.

Then in primary school, our principal, Mr. Stanley, would reward the swimming team every time we won a big competition. His reward was to take the whole team to the movies. One of those films was EMPIRE OF THE SUN. Christian Bale is spectacular in that film, but as a 10-year-old, I didn’t know who he was, or who he would ultimately become. All I knew was that there was this kid, similar to me in age, going through a dramatic journey of self-discovery in a world at odds with itself. Again, it left quite an impression on me.

The movies I saw as a young kid, the theaters I attended, in many ways crafted my love of film and the filmgoing experience. The big screen, the dark room, the feel of the seats, the smell of the popcorn, but more than any of those little details…the stories and the films themselves. And the way they made me feel. These stories from half a world away somehow resonated with me, a young boy in a movie theater at the bottom of Africa.

— The full article can be seen here